09.11.01
I was a high school freshman. I walked into German class, a class where all we did was watch movies. I sat down next to my friend Treva and the TV was on showing some kind of war scene. It took a few minutes to realize it was the news, not a war movie. It was that day's news - long, continuous footage of what was happening. That teacher wasn't a teacher who was the kind to explain anything so we just kind of watched it. Then, an announcement came over the intercom that we were to turn off the news and to "resume our schedules." I remember walking through the rest of that day not really understanding what I had seen, hearing snippets of things from kids around me, and then going home just unsure about what had happened. I had no idea what to say.

Spring 2007
I went to New York City to play in the UofL Pep Band for the NIT Tournament at Madison Square Garden. We had one sightseeing day in the city and knew that if the guys lost that night we would be headed home the next day. We ran the city trying to see as much as possible. Somewhere in the middle a group of us ended up at Ground Zero. I remember just stopping and staring in silence. Everyone was. It was the one place in the city where sound seemed to stop. Even more than five years later, we all remembered and felt that day come right back. My friend Daniel took this picture of me. I remember tears just streaming down my face. I had no idea what to say. 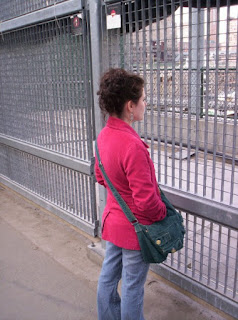 09.10.18
Last night, we drove past a local fire station and they were hanging a banner with the twin towers and a "09.11.01 Never Forget" banner. Annabeth said to me, "What does that mean?"
I told her about that day. I explained that people filled with hate ruined the lives of thousands, that they killed thousands of people. I explained how civilians, firefighters, and police officers ran towards the danger because they knew they had to try to save people. I told her about the days, and weeks, and months of work that it took to clean up the rubble, to mend the bodies, to heal the souls. And I cried. I cried thinking about their bravery and about the loss of so many. And then I told her to remember that love always wins.
Love always wins. Our country, our people came out stronger and better for having worked together. I told her that we have all pressed on by loving each other. Just like the last two times I really thought about 9/11 I didn't know what to say but I knew I had to say something - so I chose love.
Posted by Amy and Mark at 5:31 AM