I have always been sucker for a sweet romantic movie (You've Got Mail and While You Were Sleeping are my favorites) I always wanted my first kiss to be on a Ferris Wheel, in the rain. I always wanted the love of my life to meet me at an airport as I got off a plane. I always wanted to be chased like those girls in movies.

Then, at 19, I began to see my favorite love story unfold - ours.

Mark and I met on the third Saturday in May. We couldn't stand each other. He thought I was a snob and self centered. I thought he was too rough, too tattooed. We were both immediately uninterested in the other and that was that. Or so I thought.
I started "lake walks" with different staff members and sometimes Mark would join as I often walked with his brother and a good friend of ours. One night, no one met up but Mark and me. So we went. And during a stop on a bridge, I heard that Still Small Voice say "This is the man you will marry." I remember thinking,"What?! I don't even like him! I don't even know him!" We finished the walk and for weeks I prayed over this during my quiet time and I found it becoming more and more firm from the Lord. So, I began watching Mark. I loved the way he interacted with children, the way he conducted himself after a long day of work, and the way he respected our bosses. I loved the simple nature of his interests, that even on a rainy day he would find work to do, and that we seemed consistent and fair in his relationships. By the fourth of July, I found myself praying on Lake Hill "Dear Lord, please let me be his wife."
On August 3, we officially became a couple. We prayed together over what our long distance relationship would look like and we both moved to college.

Our first fall, I returned to school in Louisville and he started college in Franklin. His grandma passed away, I began having anxiety attacks for the first time, and I was deeply grieving the loss of my dear, dear friend Brandon Sage. I felt very early on that he was now "home" to me and living apart was so very hard.
By the next March, my Granddaddy had passed away, Mark had left school, and we were both complete messes. We didn't fix each other though - not even a little. We gave each other space to grow and to learn and to mess up all on our own. We let each other just be. We each made some big mistakes and we each picked up the pieces by ourselves. Little did we realize how important that would be over the course of our relationship. We learned to be together without having to always-be-together.
That June, we got engaged. Mark knew to ask me in the perfect place on the perfect day of the year and it was just every thing I wanted! It was so wonderful to know that the rest of my life was just beginning.
Nearly two years later, on another third Saturday in May, we married. 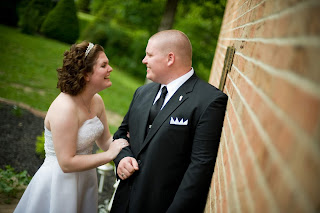 We first lived in a nice sized apartment, with a lovely rent price, in a terrible neighborhood. He worked nights, I worked days, and all we could do was wave as we passed each other on 31.
We then bought our sweet little dollhouse which become less and less romantic as we had to rewire it, rid the attic of a raccoon family, and build the back bathroom from the dirt up.
We waited and waited and waited for a baby.
We reached the point in infertility when you hate nothing more than being two instead of three. That point where the empty bedrooms in your house have to be closed off so their emptiness doesn't completely consume you.
And then we had our Miracle Girl. And although I've told her story so many times I know there is no one who really gets it but Mark. No one else who knows the joy of having her, the moment when we realized her heart had stopped, the pain of losing her, and the awe of her second chance like Mark and I do.
We made the move to Franklin and even though I was afraid, Mark said jump, so we jumped. And here we have truly made our home.
We added Owen to our family and Mark saw me through his delivery in such a steady and incredible way. If I had to pick a favorite way to see Mark, it would be the look on his face as we met our son.

In my life,
I have always been "too serious" and often be told to "just let loose"
I have always pushed people away before they ever got close.
I have always been afraid to feel, to commit, to lose.
And Mark was the first one, the only one, who never said those things to me. He never asked me to change. He saw who I was, from the moment we met, and he was right. I have a tendency to be selfish and to be snobby and instead of ever asking me to change - he fell in love with me.
And I was right, he is a little rough around the edges and it makes him fantastic at the job he does. God made him tough on purpose. I have rarely asked him to change - as I fell in love with him.
Despite not asking each other to change, we have done just that. Motherhood has softened me, made me more emotional, more open to change, and it's made me more and less selfish all at once. Mark's life's work has changed him. He has seen things that I cannot even imagine, he has processed scenes more horrific than any episode of a crime based tv show, he has met with victims and their families on a daily basis for six year now. His life is so different than when we met, completely different than the lives our family and friends lead, than we ever imagined. We have changed completely separately and yet still find a way to make our lives work together.

Our story is now twelve years in the making, our marriage is now nine years in progress, and it's by far the messiest, loveliest, best love story I know. Our first kiss, my first kiss ever, was not on a Ferris wheel in the rain (it turns out they shut down fair rides when it rains) but it was still completely perfect. He did in fact, once surprise me by waiting at the airport as I got off my flight. And while I always wanted to be the girl worth chasing, Mark made me realize it's better to just find the one that I have never wanted to walk away from.

So, to my Love, Happy #9 - may our favorite love story continue on from today...