Our Indianapolis events in April were thanks to Mark's younger brother, Luke.
On the 14, we enjoyed Lutheran High School's presentation of Seussical. Luke played the Mayor of Whooville. It was such a good show! Lots of former campers were in it which also made it really special. 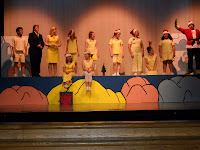 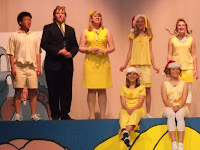 On the 24, we shared an afternoon of Prom pictures and fun with Luke and Cassidy. Beautiful! We are so blessed to have Luke as a brother and to have Cassidy as part of our family as well!
Posted by Amy and Mark at 12:28 PM No comments:

We are an aunt and uncle!!

Yesterday Mark's older brother (Matt) and his wife (Jenn) welcomed their beautiful baby girls to the world! We celebrate the birth of Miss Katherine Faye and Miss Elisabeth Marie!! We lift them up in prayer as the new Mommy and Daddy rest in the hospital and as God nurtures and grows Kati and Elli in the NICU. Wish we were there...
Posted by Amy and Mark at 3:44 PM No comments:

April has been absolutely beautiful here! This past Thursday we were both off work so we started the morning in Edinburgh at the concerete statue place to find a Mother's Day/80th Birthday gift for Momaw. Then we walked at the outlet mall - we were looking for shade since I forgot the sunscreen. We then enjoyed a salad bar lunch at Ruby Tuesday's and then found a new antique store that we'll be visiting lots now! We drove through Columbus and then decided we might as well spend the rest of the afternoon in Nashville. In Nashville I enjoyed the scrapbook store and the organic clothing place. Mark visited the cigar shop and then we both enjoyed some homemade ice cream. What a wonderful, warm, and sunny afternoon!! We left around four and I, like a little child, fell right to sleep and slept most of the way home. Once home we walked to the sushi place a few blocks from our house for dinner. It was wonderful! Oh how I love sunny days...
Posted by Amy and Mark at 7:00 AM No comments:

For March's "Indianapolis Event" we spent a Sunday afternoon at the Indiana State Museum. They currently have a special Abraham Lincoln exhibit from the Smithsonian which was filled with original documents and Lincoln memorabilia. We also enjoyed three floors of history from Indiana:

The third floor was all about the animals who have lived in this region. It had lots of animal skins stuffed and also a really neat collection of stuffed birds. Usually it makes me sad to see animals that have been killed but I was thankful that the museum had kept these animal skins in such good condition so that people can learn from and enjoy them.

The second floor was a history of the people of Indiana from Native American and pioneer artifacts through current times. One of my favorite items was a senior skirt from a Carmel High Schools student in the 1950's. She had decorated it with the activities she was in, hobbies, and general interests. I had never seen one before and so I thought that was really quite neat!

The first floor was a study of fossils and the land itself. *Note: this floor's displays were all dated in scientific time so if you, like we, believe Biblical time to be the true age of the world you will just want to admire God's handiwork and ignore their carbon dating*

All in all we really enjoyed this special place to enjoy Indiana history! Ticket Admission: $7/Adults
Posted by Amy and Mark at 7:10 PM No comments:

A lot of this month's movies shared a similar theme of being content with what one has. We felt very blessed to watch them in our new home and to share time together in this project. We have now seen almost forty of the eighty something best pictures!!
Posted by Amy and Mark at 1:02 PM No comments: