A One Word Prayer: Courage

A few weekends ago Annabeth and I headed to Gatlinburg, TN with Rose. We arrived in the mountain community of our cabin around 9:30 pm. Our directions to the cabin from the main road were a bit misleading so we guessed (BIG MISTAKE) which driveway was ours. I drove up a steep, twisting drive with tires spinning as I missed a turn a bit and ended up in gravel. We reached the top and learned it was the wrong cabin. I made a three-point turn and nervously headed back down the drive. I drove so slowly, knowing that big turn was going to be even tougher to navigate on the way down. I missed it. I slammed the brake down, calmly put the car into reverse, and lifted my foot to hit the gas - we lurched forward. I hit the brake again and began to panic. PANIC.

Two feet in front of the hood of my car the road dropped off into a deep ravine, to the right was the mountain wall, to the left was the road I needed to be turning onto, and behind me was a very steep hill. I began to panic more and more. Rose, four months pregnant and prone to crying was next to me, Annabeth, my precious daughter, was in the backseat and still, thankfully, sound asleep. I rolled the window down, pretending to examine the road, but really just buying me some time to calm down.

I waited, I felt nothing but fear. I looked over at Rose and said, "I cannot do this." She calmly replied, "I can!" She walked to the drivers side and I walked to the passenger side and as I walked I looked at my precious girl sleeping in her carseat. All I could think was that if we went over the edge of that cliff, I would lose everything, I would lose her. I was terrified. I got in the car. Rose buckled her seatbelt and gunned the car reverse up the hill and then back around the bend. She did it just like she'd tried to tell me to do it. She was fearless, full of courage. She said to me, "I don't know how I just did that. I had no idea I could do that."

I rode down the mountain feeling like such a weak woman of faith. My faith had been tested, literally to the edge of a cliff, and I hadn't had the courage to trust Him to take care of us.

Rose told me later that evening, "Amy God fully answered your prayer. You didn't ask him for courage for you, you just said 'courage' and He gave it to me."

Courage.
One little word.
One huge act of faith.
One huge blessing at the edge of a cliff.
Posted by Amy and Mark at 8:04 AM No comments:

Annabeth turned ONE on October 5th! Hooray! I, as most stay at home mamas, had a LOT of time to plan her cake. I had it in my head that I would make a cake from scratch (I've only done this one time and it was a disaster) with homemade icing (which I can usually make okay) but the day before her birthday Jenn and the kids came to celebrate her day with a Hello Kitty Princess Party! They brought a balloon, a tiara, presents, and a little round cake. Since it was just Jenn, me, and the three girls eating cake we only ate half of it. Thus...on her birthday we still had a half a cake sitting in the fridge. I quickly decided that making another cake would mean WAY too much cake for our family SO I created a fun, new one with her leftovers. Free! Love it! 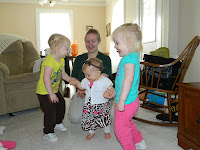 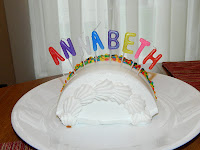 Annabeth's 1st Birthday Cake
Posted by Amy and Mark at 8:00 AM No comments: