In the beginning of our marriage, Mark worked nights and I was able to "borrow" our neighbor's wireless. I found myself spending WAY too much time on the internet. I prayed that God would give me self control and he solved my issue in a very practical way. Read that post: here


About 5 weeks ago, Mark got a new phone with all of the apps and internet so I FINALLY gave up my college flip phone (circa 2006) and took his old phone with internet. At first I found myself checking facebook about twice a day. Then I was reading the news as well. Then it was celebrity gossip, more and more facebook, and TONS of new blogs. I justified it by being "more in touch" with people in my life through facebook and by "seeking encouragement" from other Christian homemakers through blogs. Then last week I realized that this was taking up more than an hour of each evening after Annabeth went to bed. I prayed that God would give me self control to spend less time focused on the internet and to use that time more wisely. I failed to practice that self control and continued the pattern of internet use. Then today, God took care of it for good. Annabeth "ate" my phone during our trip to Sam's Club and her spit has ruined the touch screen, making the phone with internet completely unusable. So, I am back to internet, one night a week - Tuesdays while visiting my in-laws. Thank you God for pointing my focus back on what really matters.
Posted by Amy and Mark at 3:42 PM No comments:

One night in August 2006, my parents put my name in a contest at a charity event and won a black and white police pedalcar. I was 19 so too big for the car and childless so they brought it home to save for "someday" and "someone". Around the same time that night, I called home to tell my family that I had met the man I was going to marry, Mark. I told them that he was beginning school in the fall to study Law Enforcement and that his goal was to become a Law Enforcement Officer. The little police pedalcar has sat in my parents sunroom for these past 6 years, waiting for a little one to ride in it, today Annabeth was big enough!! 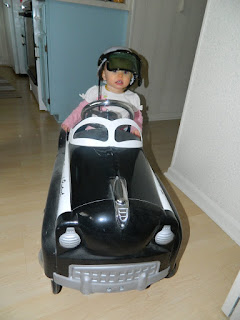 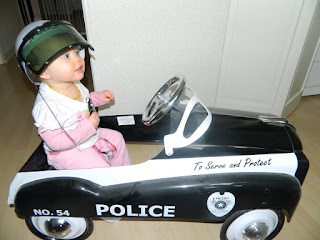 A "random" night, a "random" prize, a "chance" confession in a phone call - the August night when I had reception at Lakeview, the little car they wondered why they won, and the conversation between sisters - all part of His plan! So, today, Annabeth, daughter of a Sheriff's Deputy, citizen of a town who has black and white police cars that say "To Serve and Protect" fulfilled a strange, funny plan. Thanks be to God for our Blessings!
Posted by Amy and Mark at 9:40 AM 2 comments: